Is your coffee brew not frothy enough? A decent milk frother can save you a lot of money that you’d have otherwise spent on buying a new coffee machine. Apart from that, having a good frother will save your time and effort and transform milk into an essential ingredient in your latte or cappuccino.

Many people prefer handheld or manual milk frothers for their beverages, especially since they can whip other ingredients as well. Still, if you have decided on buying a modern electrical frother from Nespresso, we can help you choose between two of their available models.

In this review, you’ll learn that as two incredible frothers by Nespresso, the Aeroccino3 and the Aeroccino Plus have more in common than their distinct appearances show. Still, we do cheer louder for one than for the other because of its more up-to-date features.

The milk frothers under review today are manufactured by Nespresso, a renowned name in the coffee industry, with services covering most of Asia, Europe, Africa, America, and the Middle East.

Founded in 1986, it is a subsidiary of Nestle, based in Switzerland. They produce compact coffee makers, coffee capsules, milk frothers as well as professional barista machines.

Nespresso claims to redefine the coffee scene with modern, ever-expanding intuitive technology that is considerably easy to use. In addition, their user-friendly technology and responsive customer service make them rank among the top coffee-related companies globally. 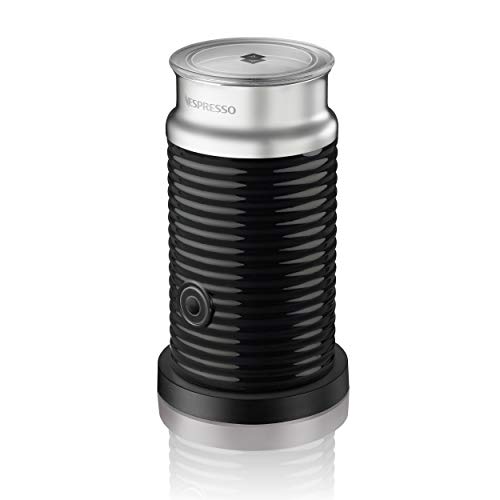 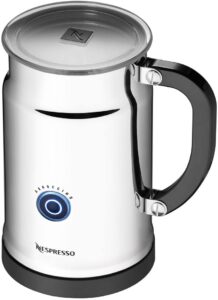 Our pick: The Aeroccino3

We decided to go with the Aeroccino3 milk frother because of its upgrades and up-to-date technologies. While both frothers are great deals and one doesn’t exactly outperform the other, the advancement of the whisks on the Aeroccino3 offers a slight performance improvement.

In addition, the design of its housing has been improved, along with some other changes. These upgrades have made the experience more user-friendly, and the improved design gives the retro Aeroccino Plus a modern twist. The advances in technology have not just made the performance better, they also add to the durability and lifespan of the machine. Plus, the price of the Aeroccino3 is lower, which is a certified deal maker.

So combine this frother with the Nespresso Inissia, the Pixie, or the Vertuo Plus, and enjoy your coffee! 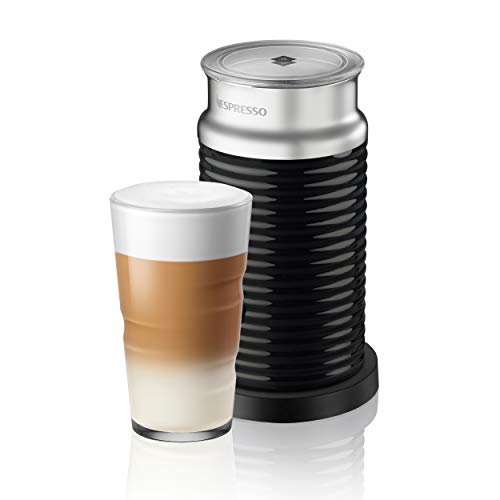 What Makes the Aeroccino3 Better?

The affordable Aeroccino3 milk frother is Nespresso’s way of bringing foamy hot and cold milk to anyone who craves a good latte and cappuccino. Coming in a plastic body that houses stainless steel, the frother and its two whisks work fast to foam it, steam it up, or keep the milk cool but frothy. Thus, it gives you full reign over the foam.

Like its predecessor and the basis for its upgrade, the Aeroccino Plus milk frother, the Aeroccino3 foams and steams at a simple touch of a button. Hot foam and steamed milk start ‘cooking’ right after you push the button. But for cold froth, you’ll need to press and hold the one button of the frother for about two seconds. One of the markings on the inside wall of the Aeroccino3 signifies the maximum level for milk when steaming, and the other shows the milk level for frothing.

In terms of its capacity, the Aeroccino3 milk frother has a little over 4 oz. of capacity for froth and something around 8 oz. for steamed milk, which translates into quite a large quantity and satisfying latte or cappuccino. Unfortunately, though, if you’re entertaining a large party of people, you will have to repeat the process several times over.

In a few words, the design on this milk frother has Nespresso’s accent on style and trendiness completely integrated into its looks. This is a tall but compact frother with a cylindrical shape available in three colors: red, white, and black. Out of the three colors, black is the most on-brand with Nespresso, and it seems like it’s the most popular version to buy.

Yet, there is something that is even more appealing to us than the stylish design of the Aeroccino3. Yes, you guessed it right! That is the improved construction of its frothing whisks, designed to level up the already outstanding performance of the Aeroccino Plus predecessor, the Aeroccino3. 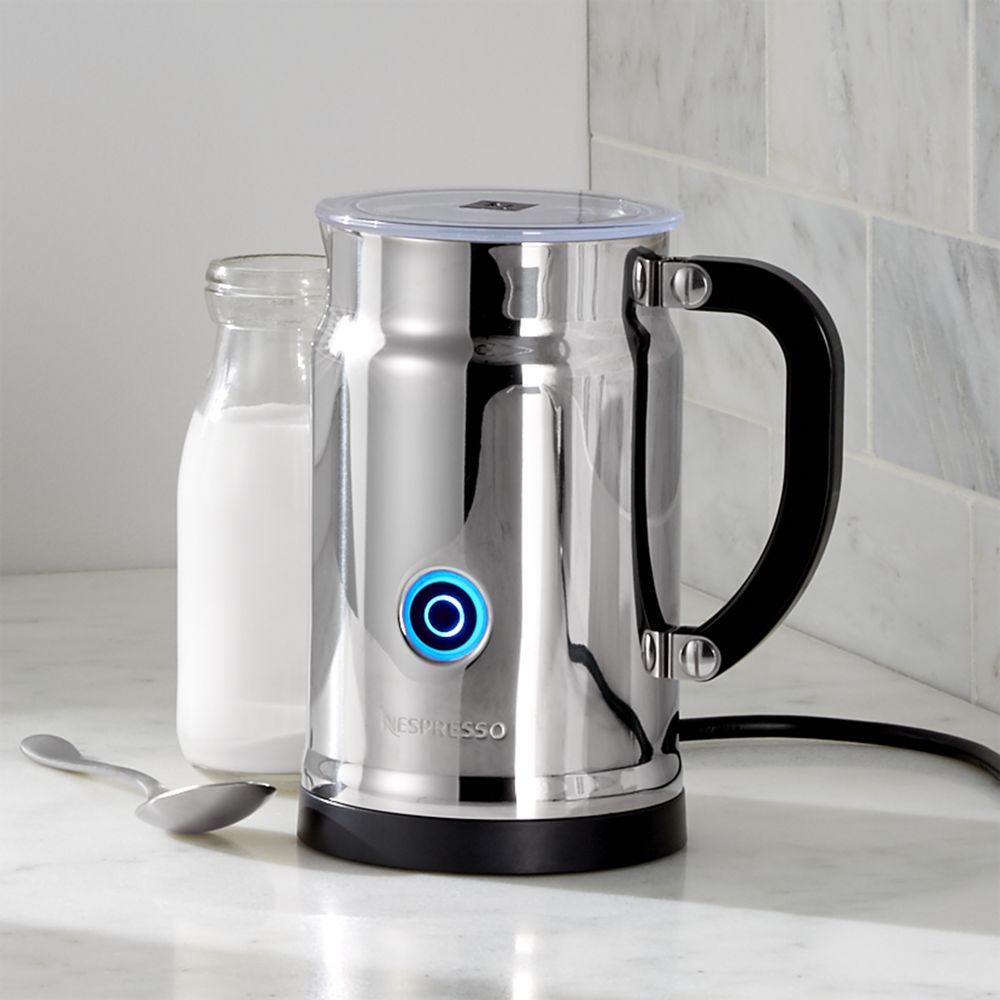 About the Aeroccino Plus Milk Frother

Made of stainless steel inside and out, the Aeroccino Plus is one durable piece of classic art — classic because of its ergonomic handle and the overall jug-like design. The color of its housing is the only nuance of the stainless steel walls, but this is entirely acceptable for a retro frother.

Like in the case of its newer version, the Aeroccino3, the Aeroccino Plus also comes with two whisks, but their design screams retro as well. The frother textures the milk quickly and adequately with one whisk for the froth and another for hot milk. Moreover, it can whip non-dairy alternatives as well.

The frother’s capacity for steamed milk and foam is 8 and 4 ounces, respectively, making any advantage in capacity barely noticeable compared to its upgrade, the Aeroccino3. Operating the Aeroccino Plus is easy, and this easiness of use is followed by the frother’s quietness in operation.

Powered by reliable circuitry and a stable base, the Aeroccino Plus is capable of heating up and preparing the milk for your latte or cappuccino in no time.

There are several similarities between the Aeroccino Plus and the Aeroccino3, and this is understandable because they are a frother-parent and a frother-child, respectively.

Both frothers come in similar dimensions, with the Aeroccino Plus being just slightly wider, which is not readily noticeable. The one-touch function is an in-built way of operation on both frothers, with the button using light indicators to indicate the product that the frothers prepare.

Like the Aeroccino3, the Plus also powers up from a wired base, and it uses two whisks when working with milk — one for hot or cold froth and the other for steaming. The two frothers have two markings for the amounts of milk needed for frothing and steaming, and once you pour the milk in, both Aeroccinos heat up quickly to prepare for the operation.

The milk and foam capacities of the two frothers are almost identical, and they are a pinch over 4 ounces for the froth and a pinch over 8 ounces for hot milk. The limited capacities might be a turnoff for people who entertain guests often, but the frothing process is quick enough.

Quiet, compact, and capable of performing very well, the Aeroccino3 and the Aeroccino Plus milk frothers are a perfect substitution for a steam wand on your coffee maker or espresso machine. If you are short on budget to buy a new coffee maker, you may be better off investing in one of these frothers.

When it comes to the design of the two frothers, we admire that of the Plus, but it is the build of the Aeroccino3 that closely resonates with our perspective on style. That said, the Aeroccino3 might not have the useful handle of the Aeroccino Plus, but we don’t see why it needs it when it has a texture that eliminates any accidental frother slips.

When it comes to the build material of kitchen appliances, we are not always pro-plastic, but in the case of the Aeroccino3, the plastic outer layer truly modernizes the frother. Compared to the retro stainless steel body of the Aeroccino Plus, the improved body of the Aeroccino3 looks like it belongs to the trendy era. Add to that the three colors in which the frother comes, and you’ll realize that Nespresso made a nice step from the one-color stainless steel housing of the Plus and its classic features. Now it can fit right into the aesthetic of a modern kitchen.

All these differences make for the final difference between the frothers — the dissimilarity in price. However, this gap is counterintuitive because instead of the Aeroccino3 being the more expensive frother out of the two, it is surprisingly the cheaper one, which is another reason to go for this frother.

Final Verdict — Which One Should You Go With?

There are numerous milk frothers available on the market; from manual ones to handheld charged frothers, there is a lot of choice. Among these two automatic frothers by Nespresso, we recommend you choose the Aeroccino3 milk frother to enjoy its compactness, good performance, and ease of use.

After all, why should you not choose the frother that has most of the same features the Aeroccino Plus has, but with slight improvements to them? It doesn’t make sense to pick an older model. In fact, it is the Aeroccino3 that often comes in a bundle with different Nespresso machines, not the Aeroccino Plus. Even though the company hasn’t recalled the older model, they know which is the better one. In short, the Aeroccino3 is the smart choice here.

However, if you truly prefer the Aeroccino Plus, you will not be disappointed because the steaming and frothing performance will not be compromised. Still, we favour the Aeroccino3 milk frother better since we are pro-developments, especially ones that go hand in hand with advancements in the coffee-making sector.

At the end of the day, it’s up to you to make the final decision.