Espresso machines with built-in grinders are quickly taking their place as one of the more popular home appliances, and with good reason. Everyone likes a good cup of coffee – that’s where a high-quality espresso machine and grinder come in. However, measuring the beans, grinding them, and tamping them is a bit too much effort for most people. That’s where automatic espresso machines come in – which are made specifically to cater to people who want good coffee but don’t want to have to work for it. Just put some beans in one end, and coffee comes out the other – it’s that simple.

The subject of this review, the Philips 1200-Series espresso machine, is of the fully automatic type. So, what makes it stand out from the crowd? Let’s find out.

Let’s start with the most noticeable feature – the looks. The design is one of the areas where the Philips 1200-series doesn’t stand out. But this is not necessarily a bad thing – it’s subtle and discreet, which means it will be a good match for most kitchens.

Espresso machines often have flashy, in-your-face designs, with liberal use of chrome and other shiny surfaces. Philips does away with that, offering a no-frills, practical design. Sometimes, such a plain and inoffensive aesthetic can be just what your kitchen needs.

The case of the Philips 1200-series is almost entirely plastic. An honest plastic case is, in our opinion, a much more sober choice than aluminum panels that will show their true colors in a matter of months.

While we’re on the subject of colors, the Philips 1200 only comes in black. In combination with the hi-tec buttons on the front panel, the black case makes it look rather sleek and modern, but also of timeless design. No matter the style of your kitchen – the Philips will match it, and you won’t have to worry about it looking dated in a few years.

Build quality is decent, as expected from an espresso machine of this price range. It’s not super solid, nor does it need to be. The materials used perfectly fit the machine’s intended use – you won’t need or want anything better for home use. Size-wise, the Philips 1200-series is a little bigger than, say, the average pod-loaded espresso machine. However, remember that it is a super-automatic machine, able to perform all of the stages of coffee brewing, starting with the beans. With this in mind, we could say that the Philips is relatively compact. 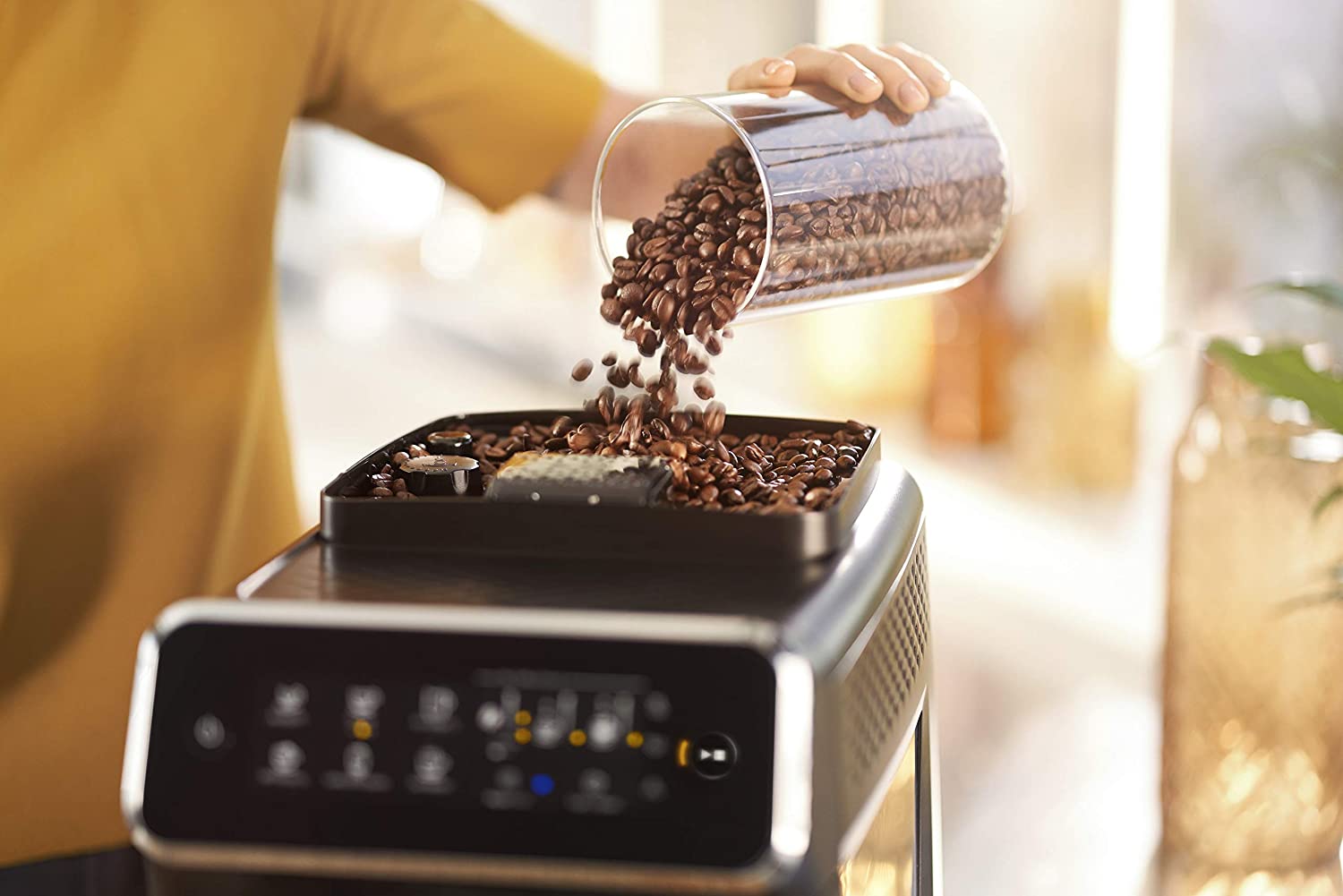 As we mentioned earlier, the selling feature of the Philips 1200-series is that it is a super-automatic espresso machine. “Super-automatic” means that it’s fitted with a built-in grinder, as well as a comprehensive system to make brewing coffee an effortless process. It does the following: it grinds the beans for you, it tamps the ground beans, and of course – it runs pressurized hot water to make the extraction. Your only job is to provide the coffee beans, the water, and the push of a few buttons.

Not only does the process of brewing start with grinding the beans, but it also highly depends on it. A good grinder is mandatory if you want good coffee, and luckily, the Philips 1200-series provides just that.

The grinder itself is of the burr type, which is the type that you want. Grind quality can significantly influence the taste of your coffee, and a burr grinder is your only choice if you want the best. The Philips 1200 offers twelve grind settings that you can choose from, and they control the grind’s coarseness. You can choose between a very coarse and a very fine grind, but it’s our advice that you refrain from touching this dial until you’ve used the machine for at least a couple of months. This is because the device comes precisely adjusted to make good coffee out of the box. If you’re at the beginning of your coffee journey, touching the grind adjustment dial might ruin your brew. Best use it with caution and only after you’ve had some experience with brewing espresso.

Furthermore, the grinder is ceramic. This material will ensure many years of trouble-free service, as it does not require sharpening. However, it’s not all perfect – the grinder can sometimes be noisy. But that is to be expected, so it’s not the end of the world.

The Philips 1200-series coffee maker can take 275 grams of freshly roast beans. In layman’s terms, this would be around 30 to 40 shots of espresso before needing a refill. 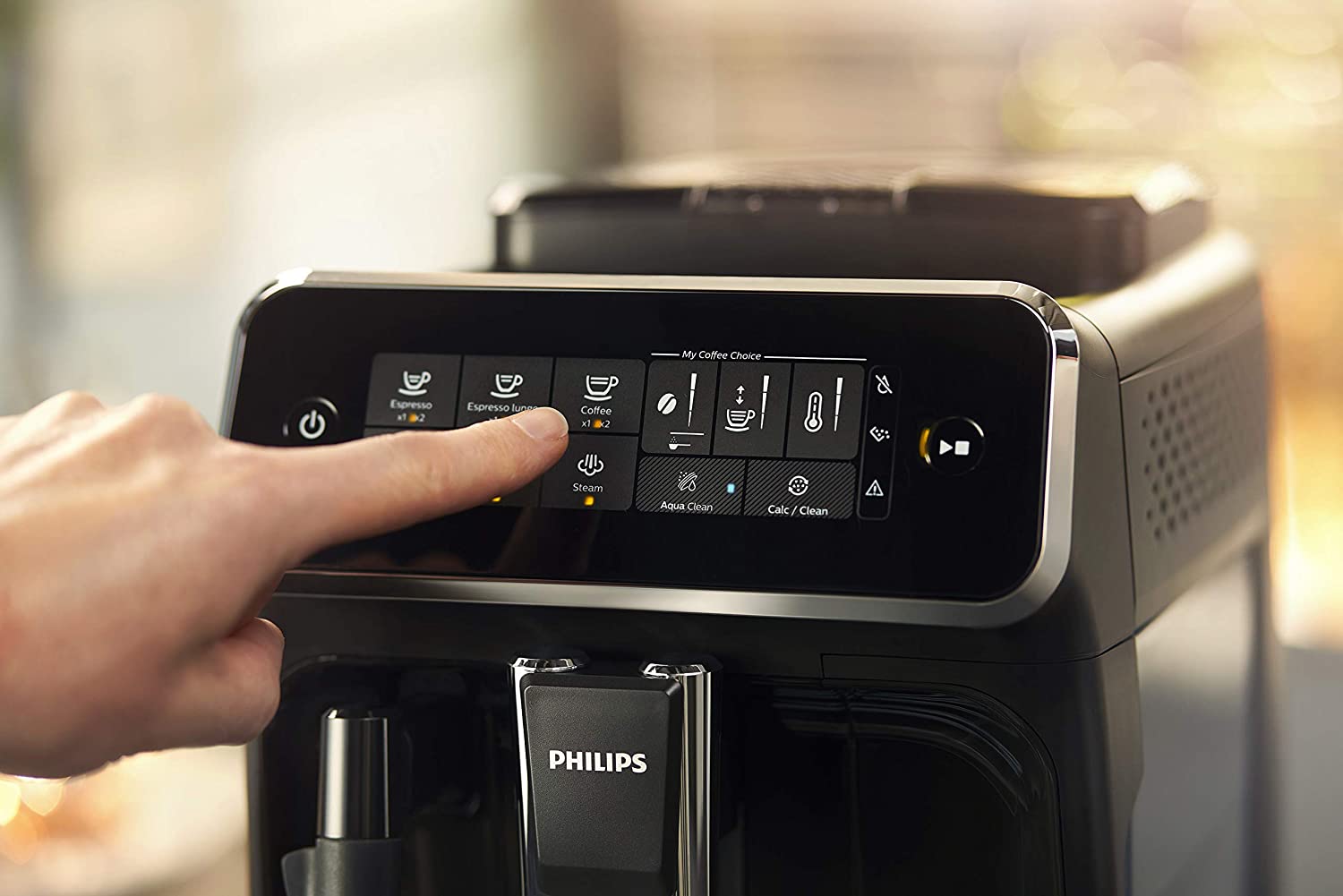 After grinding, the machine needs to brew coffee using hot water, extracting all the flavor and aroma from the beans. We’re talking about the boiler, tamper, steam wand, water container, etc.

The Philips-1200 utilizes a single boiler design. It’s reasonably quick to warm up and very consistent in temperature regulation. It keeps the water temperature between 194- and 208-degrees Fahrenheit for ultimate extraction, an intelligent feature that Philips dubs the “Aroma Extract System.” The temperature is somewhat customizable, but again, we would advise you to refrain from touching these settings for at least a couple of months. This way, you will have time to get a sense of the brew’s taste and aroma. That way, you’ll be able to make a more informed decision should you want to adjust boiler temperature. The same goes with the grinder setting.

The pump is a fairly standard 15 bar one, which is just the thing you want for espresso. Knowing all of this, it’s no wonder the 1200-Series makes good coffee. And while we’re talking about the coffee itself, we should note that the 1200 can make espresso, regular coffee, and, using the included milk frother, a latte or cappuccino.

Apart from the big stuff mentioned above, the Philips 1200-Series has a few other tricks up its sleeve.

The water tank is of very generous capacity at 1.8 liters. Not only that, but it’s completely transparent and easily accessible. You’ll have no trouble gauging the water lever, and when the time comes for a refill, it’s a straightforward task.

We all know that espresso tastes best when in a pre-warmed cup. The 1200 includes a space dedicated for use as a cup warmer on top of the machine itself to achieve this. We mentioned before that the 1200 uses a plastic casing – as such, the cup warmer is not as efficient as it could be, were it metal. Still, it’s better than nothing, and if you want to make better use of it, you can use a little trick. Put a towel over the cups you want to warm up – this will trap the heat coming out of the boiler, and the cups will quickly heat up. 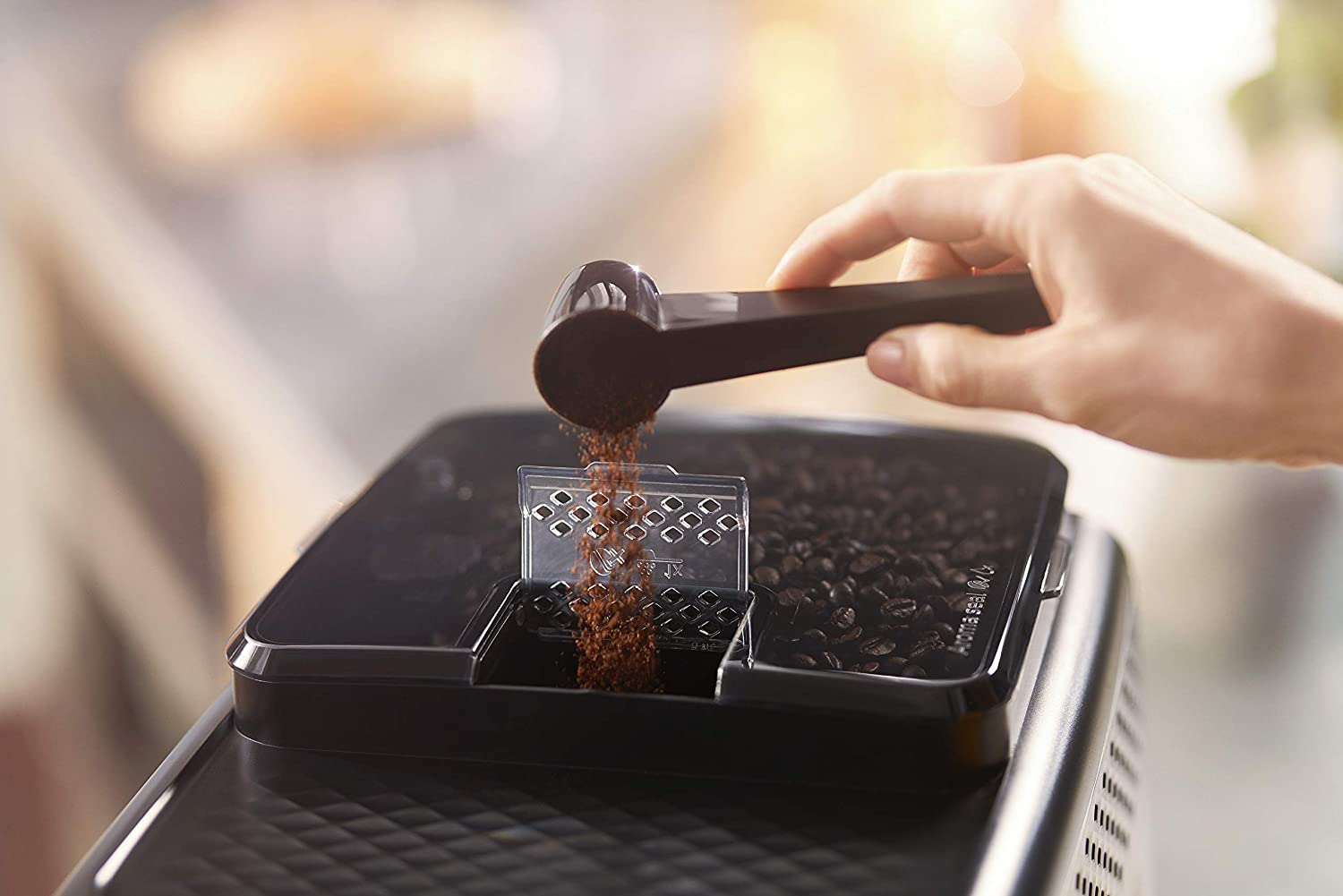 Should you want to make a cup of tea, know that the Philips 1200 can also act as a hot water/steam dispenser, among all other things. Just remember that it uses a single boiler for everything. If you use hot water or the steam feature, you’ll have to wait for the boiler to cool down before brewing your next cup of coffee.

A handy feature that is rare among coffee makers is the adjustable spout. For those of you that don’t know, a spout is the part where the coffee comes out, and on the Philips 1200-Series, you can adjust it to a height between 85mm and 145mm. The adjustable height means that you can use cups of different sizes with this coffee maker. If you have a taller cup, you won’t need to jam it under the spout forcefully – lift the spout, and you’re done. With an espresso cup, you can lower the spout accordingly and avoid messing up your kitchen.

A standard feature of super-automatic espresso machines is their ease of cleaning, and it’s the same with the Philips 1200-Series. The part called “the brew group” is where most of the brewing magic happens – with this coffee maker, you can remove it for cleaning. When you’ve done that, you only need to rinse it with water, and you’re done. You don’t even need to dump the spent grounds; the 1200 does all of that for you.

The Coffee: Taste, Aroma, and Texture 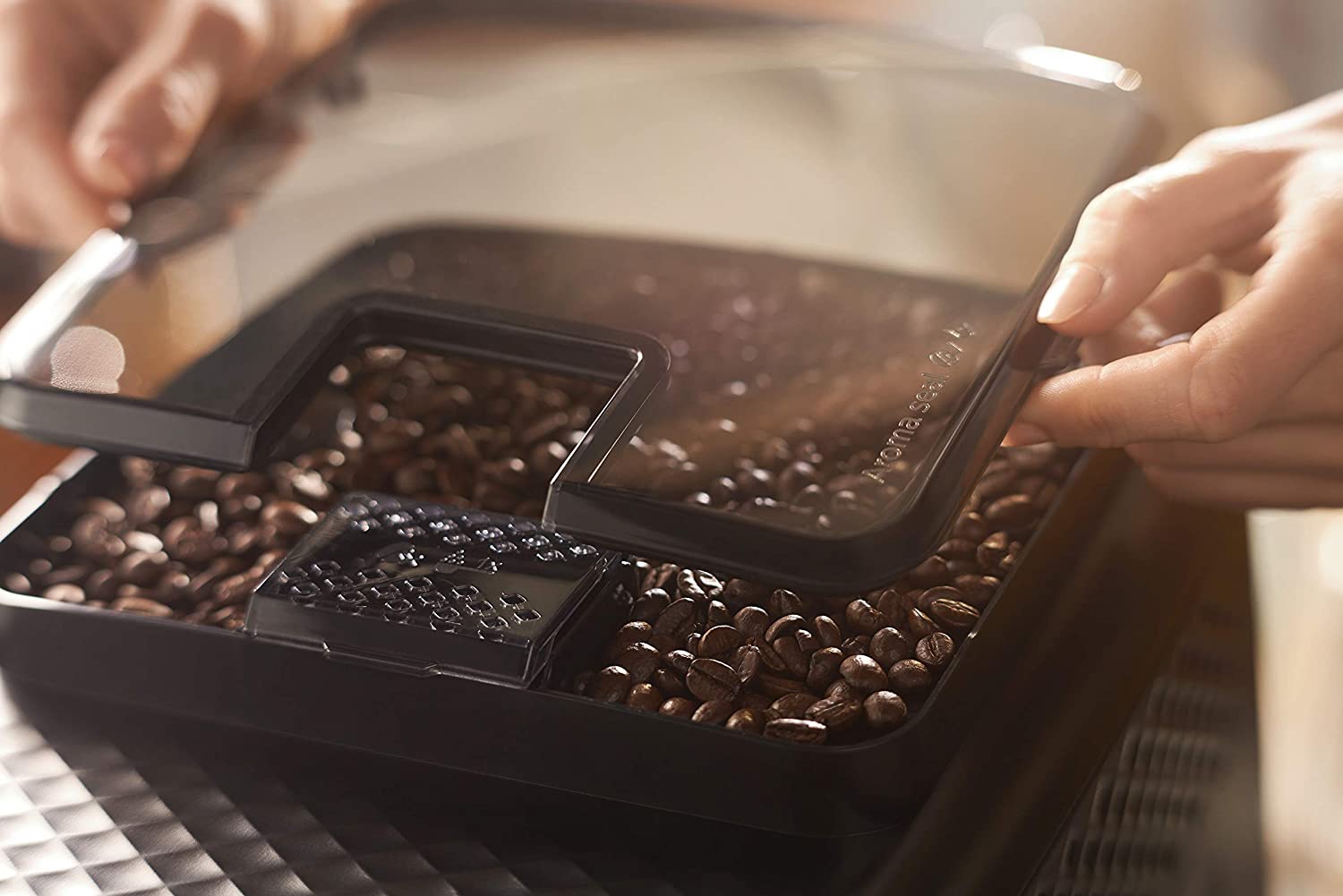 Judging by the characteristics of the Philips 1200-series mentioned so far, it’s not surprising that it brews good coffee. The boiler does an excellent job of keeping an eye on the temperature, and as a result, the brew is very consistent out of the box. The 1200-series brews the kind of espresso you’re probably used to getting at a cafe, and you know the type – thick, rich crema, bold taste, and room-filling aroma. Naturally, this is highly dependent on the quality and freshness of the beans you put in, but still – not all machines can take good beans and make good coffee out of them.

The grind and temperature settings will allow you to customize your espresso’s taste, aroma, and texture, should you want to play with them. You don’t need to do it, though – the factory settings do an excellent job, producing coffee that will appeal to almost everyone. If you still want to try a different setup, you can create different results, mainly in the sense of thickness and bitterness of your espresso. It will undoubtedly make for a fun weekend project if you decide to do it.

The Philips 1200-series coffee maker doesn’t just do espresso, and it will also brew regular American-style coffee. You do this by pressing a button labeled just “coffee,” which we thought was cute because hey – it’s coffee. Expectedly, the Philips-1200 is great in this application as well.

Last but certainly not least, the Philips 1200 can brew latte and cappuccino. We suspect you already know the procedure – you brew a shot of espresso, froth some milk with the machine’s built-in wand, and mix the two. With a bit of practice, you could even play around with latte art and impress your friends.

While the Philips 1200-series is an excellent product, it does come with a couple of flaws. The plastic casing, for instance, might strike some people as cheap-looking. Although you can improve its functionality with some tricks, the cup warmer does not work very efficiently. Lastly, the noisy grinder and the single boiler system can do with some improvements. Still, we don’t consider any of these slight flaws a deal-breaker.

The Philips 1200-series coffee maker is a thoroughly modern and competent machine. Whether you like to drink espresso, macchiato, or just plain old coffee, this coffee maker will brew them all to perfection. The taste and aroma are consistently excellent, no matter the chosen drink. And not only does the coffee taste good, but the Philips 1200-series also looks the part.

We should, of course, note that the Philips 1200-series is not perfect. It does come with a few flaws, but then again, what doesn’t? These flaws are so tiny that they fade compared to the machine’s strong points. After all, you’re buying a coffee maker, and in this price range, we doubt that you’ll have any complaints.

So, if you’re in the process of choosing a super-automatic espresso machine, look no further than the Philips 1200-series. It will give you great coffee day after day and ask very little in return. Happy coffee making!