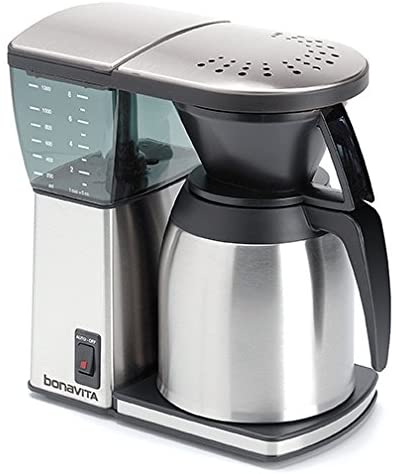 We love seeing design improvements on coffee makers and deeply enjoy when a coffee maker transitions from its classic looks to trendier ones. The look of the Bonavita BV1900TS is entirely sophisticated and not only that— this sophistication also reflects Bonavita’s great intentions to actually offer more to you. If the 1800SS is the basic model of the two, the BV1900TS tries to be a better coffee maker with its optional pre-infusion, reinvented showerhead and thermal carafe, and some other refinements from top to bottom. How successfully this Bonavita model does this can only be seen when compared to the long trusted 1800SS; our Bonavita 1800 vs 1900 review will clear any ambiguity related to these coffee makers.

Very simple to use, as it’s one-touch

SCA-certified for brewing coffee by standards that guarantee its flavor

Performs well consistently, evenly saturating the coffee and then properly extracting it

The thermal carafe keeps your coffee hot for a couple of seconds, minutes, or hours

Some find 8 cups of coffee being too little coffee 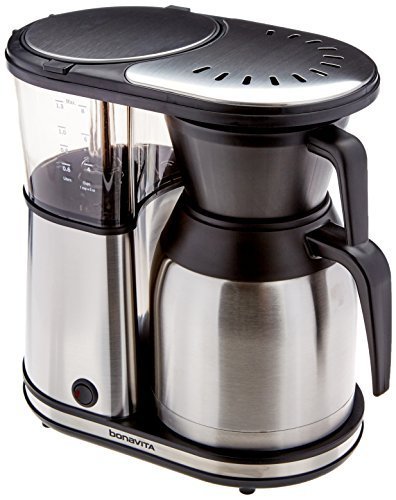 The water reservoir is marked for cups, making it easier for you to select the coffee quantity

A powerful heater for a stable brewing temperature

After comparing the two Bonavita coffee makers in depth, we wholeheartedly agreed that the Bonavita 1800SS is the better model of the two. We do appreciate Bonavita’s efforts to push its coffee makers into the future of sophisticated designs and technological advancements, but people expect more nowadays. Unfortunately, the outstanding design of the BV1900TS has a few flaws that we couldn’t unsee, and the pre-infusion option seems to introduce confusion because it’s unclear when it’s on. It seems like the BV1900TS always shoots for the stars, but begins to dissolve in its own downsides, like when it failed to ‘beat’ the Technivorm Moccamaster. The carafe doesn’t truly deliver, the showerhead won’t always drip from every hole, and there are also other flaws in the design that just make the coffee maker a little less user friendly. If these flaws ceased to exist over night, we’ll definitely pick the BV1900TS as our winner, but until then, we’ll stick to the amazing Bonavita 1800SS.

About the Bonavita 1800SS

The Bonavita 1800SS is an excellent 8-cup coffee maker that makes great and healthy coffee with its quality features and BPA-free plastic parts. Convenience is interwoven within the overall design of the coffee maker, from its one-touch brew function to the nicely-isolated thermal carafe. The stainless steel thermal carafe is glass-lined and vacuum-walled and if features a nice lid that is easy to open and close. Adequate in-carafe coffee temperature is one of Bonavita’s major coffee-making postulates, and the company stays true to this idea with the design of its thermal carafe.

Bonavita also made this SCA-certified coffee maker to brew coffee at the right temperature. Every drop of water flows through the 5 holes of the 1800SS at a temperature from 195 to 205 degrees F, which is possible thanks to the powerful 1400-watt heating element. Once it starts to evenly flow through the showerhead and into the cone brew basket, the heated water saturates the coffee that you’ve put in the basket evenly. The optimal water temperature and the smart design of the showerhead make for proper coffee extraction, and once the coffee is in the thermal carafe, its heat is well preserved.

The overall design of the Bonavita 1800SS is truly user friendly, which is stated through the handle of the brew basket, the marked cup sizes on the water tank, the marked auto off function, and the dishwasher-safe carafe lid, brew basket, and showerhead. This is a beautiful coffee maker option that is as popular as the beloved Technivorm Moccamaster, and, in between the convenience and simplicity that it offers, we can definitely see why. 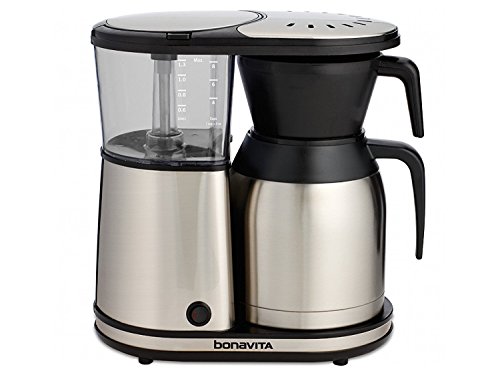 About the Bonavita BV1900TS

Very similar to the Bonavita 1800SS, the Bonavita BV1900TS seems to be its improved version. It is an 8-cup coffee maker like the 1800SS, but it has a more powerful 1500-watt heater to heat up the brewing water to temperatures from 195 to 205 degrees F. SCA-certified, the BV1900TS offers you the optional pre-infusion, optionally pre-wetting the coffee to degass and bloom it.

We love the pre-infusion option because it promises better coffee flavor, and, with the stainless steel thermal carafe of this coffee maker, coffee flavor last longer. The carafe is double-walled and lined with stainless steel on the inside to prevent any drops in coffee temperature. It has a lid made of sturdy plastic which, like the rest of the plastic parts on the BV1900TS, is BPA-free.

The coffee flows into the carafe through the flat-bottom filter basket of the coffee maker. This brew basket has an improved design with a larger extraction hole on the bottom for no coffee retention inside the basket. The basket and the 11-hole showerhead of the coffee maker are supposed to encourage the proper saturation of the coffee, and the optimal temperature of the water is supposed to keep the good flavor of the coffee under the good control of the BV1900TS.

All cards laid on the table, this coffee maker is a nice option for you if you admire its optional pre-infusion, the powerful heating element, and the improved showerhead.

Similarities between the Bonavita 1800SS and BV1900TS

It is because Bonavita cares about standardizing its coffee makers that we can see so many similarities between the 1800SS and the BV1900TS.

The design of the these two coffee maker models is almost identical. Following the typical Bonavita drip coffee maker look, both of these coffee makers have an outline that consists of a heating element, a water reservoir, a shower head, a brew basket, and a thermal carafe. The colors of the two coffee makers reveal their materials, and it is clearly visible that both the 1800SS and the BV1900TS are made of black plastic and stainless steel parts.

Plastic parts are BPA-free on the two coffee makers, which makes them nontoxic, and they are also both SCA-certified for premium quality coffee making. As the markings on the water tanks on both of the models say, the Bonavita 1800SS and the BV1900TS are 8-cup coffee makers; eight cups of coffee is what you’ll get in the stainless steel thermal carafes of these two coffee makers if you press their on/off buttons.

The coffee will be brewed under the same optimal temperature from 195 to 205 degrees F, which is the correct temperature to brew coffee at as recommended by coffee specialists. Dishwasher-safe elements are present on both the 1800SS and the BV1900TS, with their plastic carafe lids, brew baskets, and showerheads made to take an occasional trip to your dishwasher.

Convenience, simplicity, and quality coffee are the essential principles after which these two coffee makers were designed, and Bonavita has made sure to keep that clear with the one-touch control, the easy to clean components, and the features that make for optimal water temperature and proper coffee extraction. Who said you need to get a Bunn coffee maker, after all!

Differences between the Bonavita 1800SS and BV1900TS

In spite of their similarities, these two coffee makers are more different than it seems. They might have optimal designs for an optimal coffee extraction, but, unfortunately, the BV1900TS underperforms and fails to pass the expectation test of its customers. That said, the BV1900TS might have 11 better outlined drip holes on its shower head, but water sometimes fails to unanimously drip through all of them. On the other hand, the 1800SS has only 5 showerhead openings that are spread in a way that could be improved, but water does exit through each one of them evenly.

Something else that we consider to be great on the BV1900TS is the flat-bottom filter basket. The filter basket on the Bonavita 1800SS is V-shaped and it has a tiny coffee extraction hole on the bottom. This kind of design is a little bit inferior to the design of the flat-bottom basket with a slightly larger hole on the BV1900TS, which makes for a slightly faster extraction of the coffee. Still, with the design flaws of the showerhead of this coffee maker, the equal saturation and the fine bloom of the coffee are questionable.

Differences between the two coffee makers also exist when it comes to the power of their heaters and the ability to pre-infuse. While the 1800SS has a 1400-watt heater, the BV1900Ss features a slightly more powerful heater of 1500W. We like that Bonavita decided to upgrade this component, so we congratulate the manufacturer for that.

While the optional pre-infusion on the BV1900TS is also a nice step for Bonavita, we cannot accept the lack of intuitiveness that follows this feature. We think that, for the sake of convenience, there should be a good indicator that will indicate when pre-infusion is happening.

When compared to the 1800SS, the rest of the design of the BV1900TS follows different looking vapor openings, a stainless steel-lined thermal carafe with a lid that is harder to open and close, and some cosmetic improvements of the entire coffee maker. These are all acceptable and desirable changes, but not enough to make this coffee maker better than the 1800SS.

Which one should you go with?

Bonavita did some things right and other things wrong with the overall design of the BV1900TS. If there was no pre-infusion confusion, if the carafe were to keep the coffee hot as it’s supposed to, and if the shower head were to be more reliable, we would’ve picked this coffee maker by Bonavita. We love the looks of the BV1900TS, but we are uncertain about its overall performance. Therefore, we will keep the Bonavita 1800SS close to our hearts until the flaws of the BV1900TS are repaired, and when they are, we will still love how the beautiful 1800SS functions.

100% convinced that you’re getting a Bonavita coffee maker? Check out the Baratza Encore and the Capresso Infinity too! You’ll need a nice grinder for your coffee maker, so we thought we should lend you a helping hand!